I play in an online Dungeons And Dragons campaign, over Roll20 and Discord. The GM running the campaign came up with tehir own home-rolled setting (as GMs are wont to do). And as part of this creative output, they also hand-drew a map (as GMs are wont to do). It was a rough sketch, enough to give context to that world, enough to give the characters something to explore.

I like props. And I love a good map. So, as I've done in previous campaigns, I downloaded scanned copies of their hand-drawn maps. I read their setting write-ups. And I opened up Photoshop. 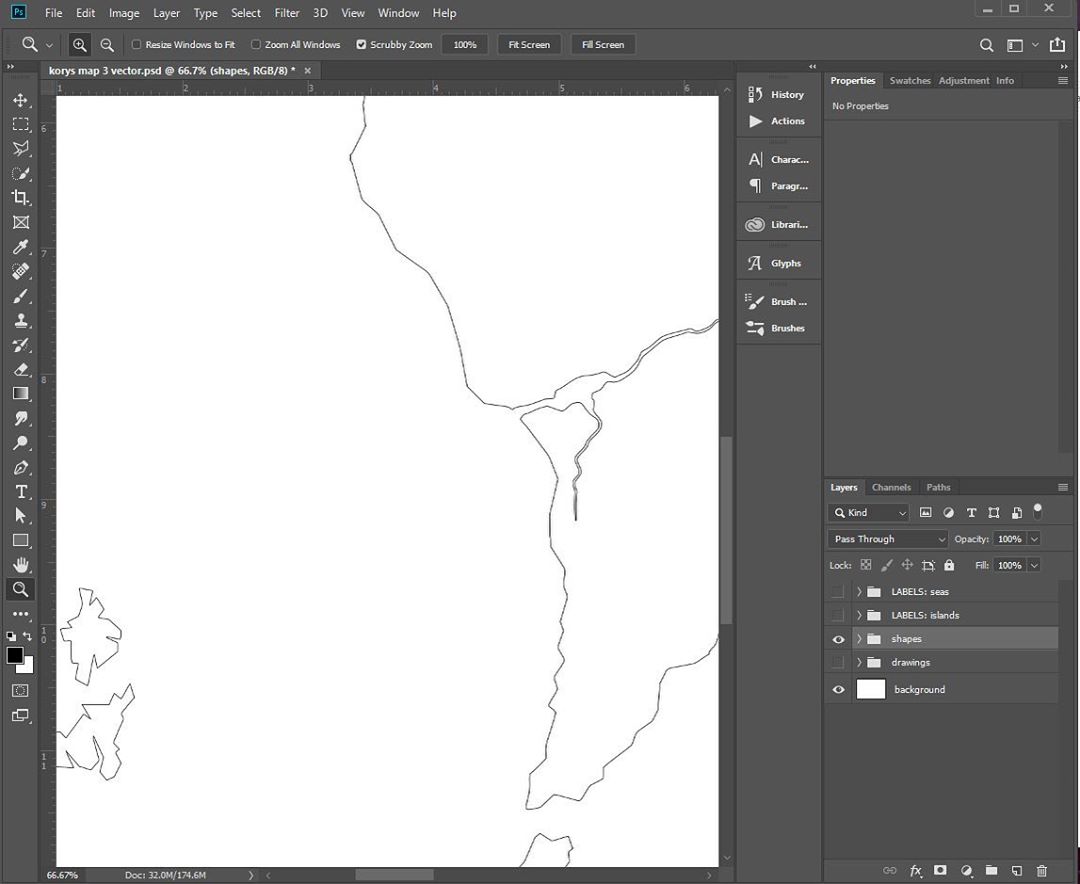 I started by tracing the land in vector shapes. Then I took those land shapes and a duplicated them, slightly larger each time. I replicated the concentric shorelines I've seen on old maps, using a technique I first cribbed from Irshad Karim's fantasy map tutorial.

There's something immediately retro about this look. But I didn't want a series of lines fading into the surrounding water, I wanted a design that felt closer to old-school dungeon maps. The kind with their thick, fat wall edges. So I made the shoreline black. Bold. Heavy. They stand out, and they help the land they surround stand out. 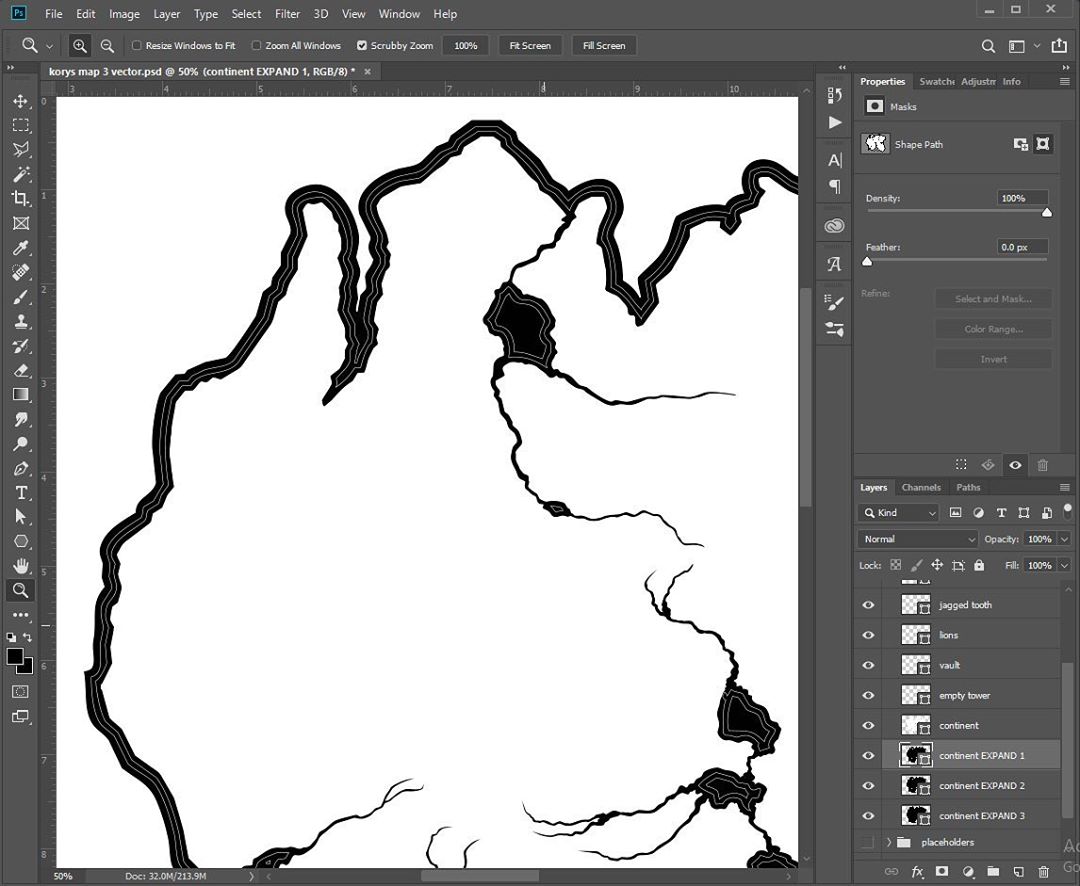 Each map I make in this style, I waste days trying to "fill in" the oceans. With a repeating pattern or with rhumb lines. In the end I always go back to a flat white. Its the ocean, its negative space, and it doesn't matter. The emptiness, with those bold coasts, it accentuates the land masses.

Next, the mountain ranges. They are major land features, defining how most of the rest gets placed. Forests will wrap around them, rivers will flow down off them, towns will nestle at their feet. And because of their size, I want as blank a canvas as possible to work with. Its too easy for every mountain to look the same. I need to work to get in some visible variation. 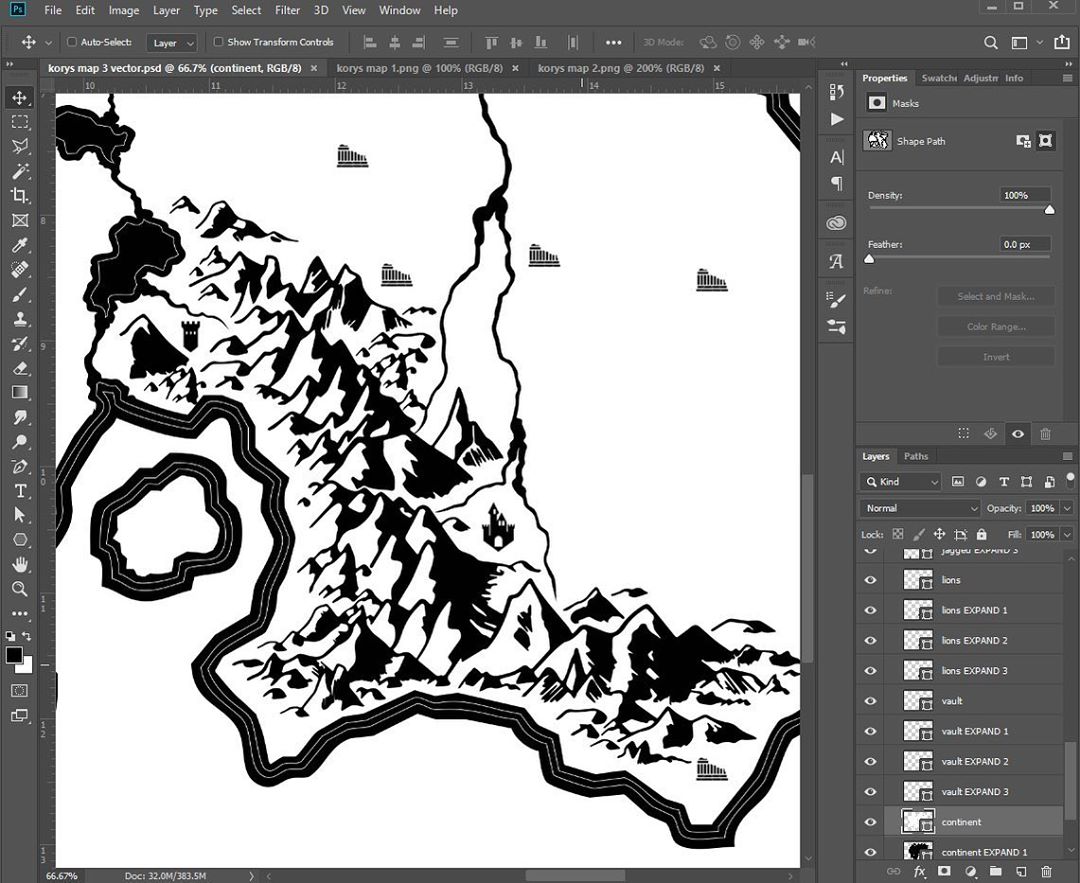 I don't have the patience to draw so many upside down triangles, nor to figure out the shadows and planning the density and all that. This is where the hard work of others come in. A quick visit to DeviantArt, I found better artists than I have that have made numerous free art brushes. Different individual mountains, different mountain ranges. Different sizes, different styles. I grabbed a bunch of them and then I mixed-and-matched.

While there, I also grabbed art brushes to use for the other features. Things like trees, forests, towns, marshes, castles, etc. Whenever someone sees one of these maps, I gotta let them know a huge amount of thanks goes to the folk giving away these resources.

Here are links to most of them, in no particular order. I didn't use all of them in this map... but you might, on your own map.

When placing mountains, I used several disparate brush sets. I didn't worry about how the styles didn't match. I didn't worry that, when sized to a matching scale, some of the brushes turn fuzzy. I wanted an interesting looking feature, and I knew the inconsistency would be fixed by the next step.

Not sure how it was introduced to me, but I watched "Photoshop and Illustrator Quick Tip: Line Art / Pen & Ink Clean-Up" by Evan Eckard and I've used a variation of that technique dozens of times since. The traced result normalizes the differences. I could get a controlled density/boldness by adjusting the paths created. And I could copy-paste the end result back into Photoshop as a shape layer, allowing me to scale or transform it while keeping it clean. Seriously, if anything I put up online doesn't look like scratchy garbage, its probably because of this one tip! 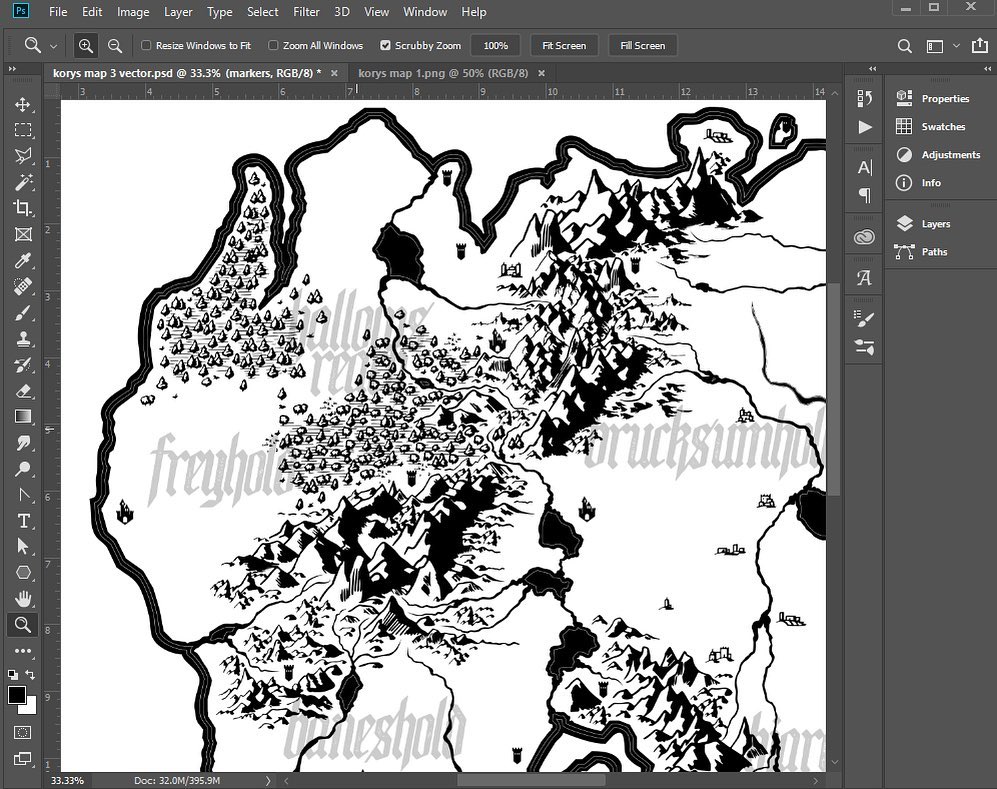 After the mountains, I stamped in forests. In the original hard-draw maps, the forests were drawn in as overly-cohesive blobs. I kept the general shape and let them "leak" at the edges. Jut out a bit, with the stray tree here and there. They look much better with ragged, poorly-defined borders. The main exception is when keeping the other features readable. Not too much overlap with the mountains, with the hills, or with the rivers. I made clear spaces, clear divisions. Same as for the placement of towns and cities. Entirely for legibility.

The fonts were picked to match the emerging design. The map has an old-fashioned, fantasy map look, but its also got a modern industrial aesthetic. For this, I usually go for something like a blackletter. Something heavy and authoritative. Or something distressed, with character and age. A font that fits in with what I have, but can still add to the conversation.

I browsed for freebie fonts over at PixelSurplus. Like the brushes above, these maps would not look half as good without the great look of these fonts. I didn't end up using all of these, but here's links to a bunch of them anyway. Find yourself some inspiration.

The grunt work was followed by a day or two of fiddling. Tweaks here and touches there. Until I finally admitted its was fine the way it was, and left it alone. 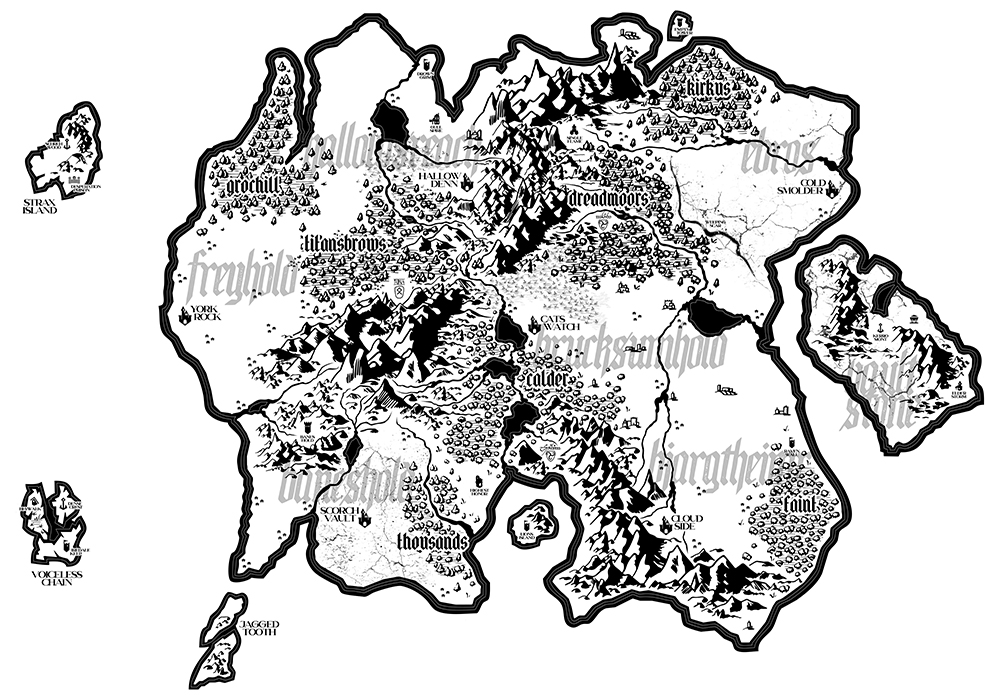 By working at large dimensions - 4000 pixel wide, 200 dots per inch - it saved a pretty large JPG. Even knocking the quality down to sixty percent, it weighed in over 3MB in size. But even at lower quality, it didn't lose much detail. Its basically black and white, after all.

And it the large size came with an advantage: when put into Roll20, the players could zoom in-and-out pretty decently! I mean, its no Google Maps, but the black-and-white design is easy to read, and the GM can use Roll20's built-in drawing tools to add bright-coloured markers as they needs. On top of the stark black-and-white map, those extra notations and notes pop!

Now, as practical as the end result was, I did want to play with it a smidge more. Over the past couple months, I'd seen a couple Roll20 "splash pages" posted to Twitter and Reddit. These splash pages are like title cards, the first picture displayed in the Roll20 game-space. Its what everyone sees when logging in, and the first thing viewers see when joining a live-stream. These sorts of splash pages usually include more info than just the map... stuff like character portraits and references to past sessions. I didn't feel the need to go that far. I only wanted to add some skeuomorphism to my game of pretend. 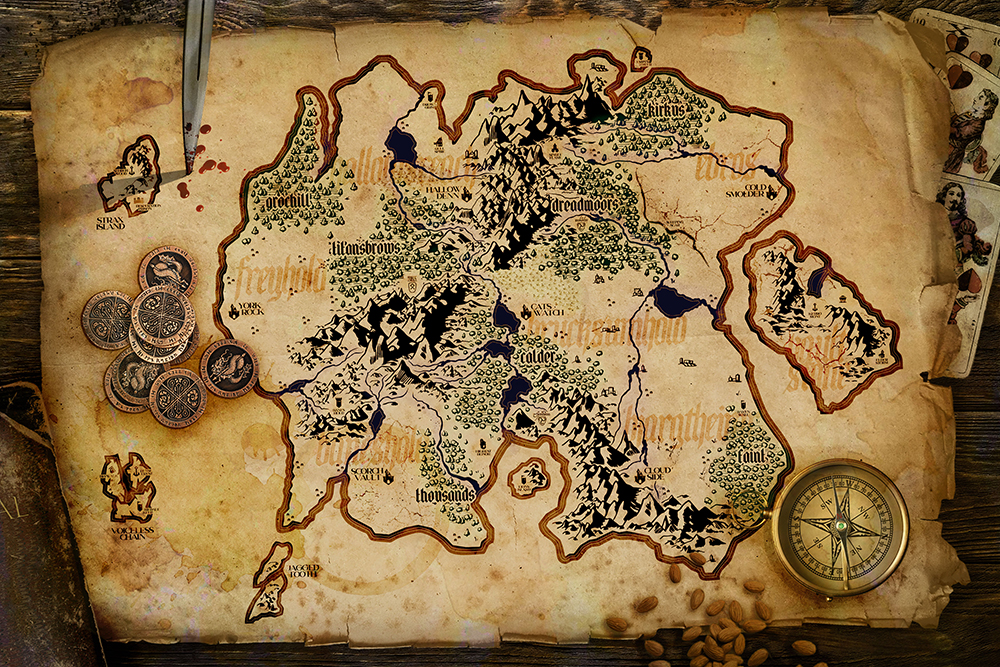 I think it all turned out pretty okay!