On Sunday afternoon, I was finally able to run my first full session of Torchbearer. I enthusiastically backed the original Kickstarter project back in May and had received my copy of the rulebook four months ago. Since then, I've been bugging my friends about the game, but at the time we were all committed to other roleplaying campaigns. In the past few weeks though, I suddenly found myself agreeing to running two separate adventures on fairly short notice... and I hadn't even fully gotten a solid handle on the rules yet!

I spent a week absorbing as much of the rulebook as I could. I'll be running both groups through "Under the House of the Three Squires", the introductory adventure, straight from the back of the book. I'll also have the advantage of running the games on alternating weeks, so I can experiment with one group, note any strengths and weaknesses in the delivery, and then apply fixes to my GM-ing technique the following week. With luck, I'll have a grip on the system by the time both groups have run through the adventure.

With only one game under my belt, what pieces of advice I can offer to other budding Torchbearer GMs? 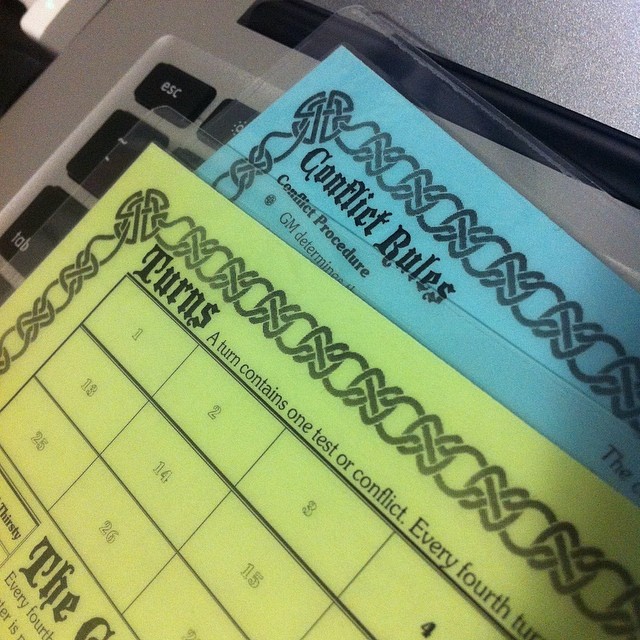 First of all, go to the Burning Wheel webstore and download the free GM PDF Bundle and the free Play Sheets PDFs. Print these out and take them to your game. Hell, print out several copies. They summarize many of the tables, charts, references, and rules into handy double-sided sheets that you and your players will be referencing a lot. This'll save you the effort of flipping back and forth through the rulebook.

Make sure to have glass beads or pennies or poker chips or some other small tokens. You'll use them for showing and manipulating dispositions in conflicts. It's possible to do this just by scribbling down numbers on a piece of paper, but trust me, it'll work much better having those physical pieces on the table. When players watch the six tokens they started out with drop to a measly one, they'll understand just how much trouble they've gotten themselves into.

Also, bring a dozen six-sided dice. You'll not only be using them for rolling conflict resolutions, but you'll end up using them for counters. How many turns since the last camp phase, how many turns does the light sources last, etc. You'll also end up passing them around to represent help or hindrance in individual rolls.

Buy a pack of blank index cards and a bunch of pens. They're cheap, they can be picked up almost anywhere, and they're an easy way to record actions during conflict rounds. As GM, I would write three letters to represent what the antagonists were doing ( "A-F-D" for attacking, feinting, and then defending, for instance), and then I would place it face down on the table. The players could then talk and strategize and brainstorm amongst themselves confident I wouldn't be influenced by their plans. As a group, they'd write their own actions in the same fashion o a single card, and they'd write the name of each character that would be doing each action. When the round was resolved, we'd all scratch that info out and, on the same card, choose our next three actions. The players could use the last scratched-out action set to remember who acted last and who'd get to act next.

If you sign up for the Burning Wheel forums, you may wish to download the custom player aids created by user "lizlarsen", here and here. Some of it simplifies elements in the official GM/Player PDF bundles mention above. Some of it provides replacements for the optional (and currently sold out) Torchbearer Players Decks. All of these tools are very much recommended, especially for the handling of light sources, the tracking weapons, and the keeping of longer campaign records. I'll probably take a stab at making my own version of them, though; I have slightly difference ideas for their layouts... and I like making these sorts of things :)

Lastly, make sure all the players at the table have buy-in on the type of game you'll all be playing!

Unlike many other roleplaying games, Torchbearer is very much a "we all hang together or we all hang separately" experience. The restrictive nature of light sources, the grind of the turns, the layering of condition upon twist upon condition, the desperate need to make every individual roll count... it all comes together in gameplay that'll punish players trying doing their own separate things. Splitting the party is never a good idea. Doing something "in the meantime" while another player is occupied is not an option. Taking a "kill them all, let whomever sort them out" approach to conflicts will lead to an inevitable TPK.

Luckily, the game I ran on Sunday only involved two players, so it was less effort to ease them into it. One of them had previously played Mouse Guard and had even ran a Torchbearer game himself. But still, it took a bit for the two of them to understand the almost-comically-unforgiving nature of the game. Within an hour, one of them was injured from a fall and sick from a fever. They had run through most of their torches. They were quickly going through all their rations. They were exhausted. They were thirsty. They were often stranded in the dark. And they had only gotten through three rooms! Resting up in a much needed camp phase, they proceeded with a more cautious, cooperative approach and found themselves making better progress.

I plan to do a better job preparing for future games by printing out player aids and bringing much needed supplies. My upcoming game on Sunday will have four players this time, all of which have more of a Dungeons-And-Dragons background; I'm not certain if any of them have played either Burning Wheel or Mouse Guard. Assuming I can do a good job presenting the adventure and conveying what the game should "feel" like, I look forward to introducing them to Torchbearer!