Several weeks later, I am still playing in and enjoying the WW2-based roleplaying game. Our characters are deep in occupied France, ahead of Patton and Montgomery's lines, clandestinely chasing down our targets through Paris and, inevitably, Germany and Berlin. Its a gritty game, the odds are stacked against us, we're outnumbered, we're outgunned, and our small field team has already taken serious casualties.

The thing I like best about the game is the espionage elements, the underdogs elements. In fourth edition Dungeons And Dragons, you can feel like video-game characters or superhero characters, charging in and firing off multiple powers and letting your hit-points absorb it. Here, we don't want to be fighting if we can, because we're almost always horribly outnumbered. We don't want to charge in, because that's a sure-fire way to get permanently maimed. We don't want to single-handedly end World War 2 and save the world... because we can't. We're half-a-dozen guys surrounded by the entire German army; we're lucky if we can get in and out of a city alive.

I've been continuing my "historical document" project, following our in-game progress by creating letters, memos, notices, etc from the period. I'm enjoying putting them together, always trying to make it third- or fourth-hand accounts. It allows me to add some fiction around the game without worrying about interfering with the plot, the players' characters, the GM's plans or NPCs, etc.

The latest is a letter from Vatican City about the a disturbing report from Paris. 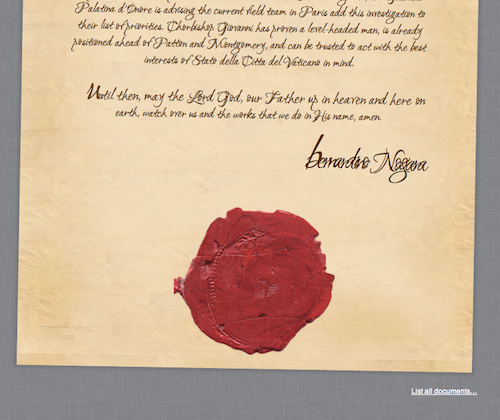 I welcome you to read all five documents online so far. I am planning on doing more, including some "background" documents that may set up the players' character (assuming I can get their permission to do so, and possibly some contributions).